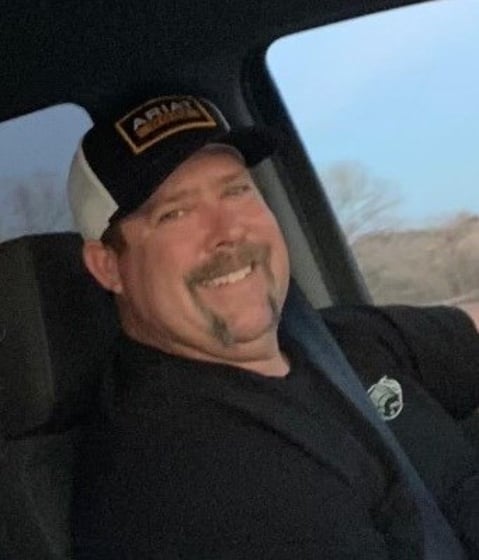 Mike Wright graduated from Glenwood High School in 1994 after an amazing and eventful wrestling career. After high school Mike learned the tools of the trade in carpentry, electrical and concrete while working at various jobs until finally landing the job at OPPD.  Mike was an Underground Construction Worker for the Omaha Public Power District for 17 years. He took pride in his craft and was a proud member of the International Brotherhood of Electrical Workers Union Local 763.  Mike enjoyed collecting anything Busch Light and all smokeless tobacco advertisements and his “man cave” showed it! Anita was okay with it as long as it all stayed in the basement. Mike loved to watch his daughter, Kaylee, play basketball during her high schools years minus the squeaking shoes and he was beyond proud of her drive and ambition leading her to a future associate’s degree in Dental Hygiene.  Mike loved to watch his son, Levi, play baseball all throughout high school with one final amazing season of football mixed in and definitely loved the fact that Levi shared his love of hunting and collecting guns.  He was beyond proud of both of his kids and loved them immensely.  Many games of pool and darts were played at his favorite hangouts like Smitty’s and Meg’s Burgers and Brew. He enjoyed watching cooking shows like Diners, Drive-Ins and Dives, Chopped, Man v. Food, Guy’s Grocery Games and Beat Bobby Flay.  This usually resulted in a new recipe for Anita, Kaylee and Levi to try out which usually ended in one or all of them making a sandwich. Mike didn’t know a stranger and always made everyone feel important and included.  He gave the best hugs and his smile was contagious which complimented his incredible sense of humor.

Mike was preceded in death by his grandparents, Virgil and Lila Forney, Corwin and Lelia Hardy, Orville and Anita Wright and Kenneth and Elsie Ehrens; and a brother in law, Andy Hardy.  He is survived by his wife, Anita Wright of Malvern, IA; daughter, Kaylee Wright of Malvern; son, Levi Wright of Tabor, IA; parents, John and Marcia Wright of Glenwood, IA; brother, Jeffrey Wright and wife Shannan of Chandler, AZ; parents in law, Lavern and Bev Hardy of Malvern; sister in law, Angie Jamison and husband Doug of Randolph, IA; nieces and nephews, Colin Fuller, Macy Wright, Dallin Wright, Dakotah Jamison and wife Jami and their daughter, Rosie, and Jakob Jamison and fiancé Dianna Smith and son Braden; numerous Aunts, Uncles, Cousins, many other relatives and an abundance of friends.

Visitations will be open after 5:00 PM Tuesday with the family greeting friends from 6:00 to 8:00 PM at the Marshall Funeral Chapel in Tabor, IA, there will be no viewing.  Private interment of ashes will be at a later time in the Tabor, IA Cemetery and memorials will go to the family.

The Marshall Funeral Chapel in Tabor, IA is in charge of arrangements.