On Saturday, October 1, it was a somber homecoming as the Peru State football team was shut out by Evangel 28-0. The Bobcats fall to 2-4 on the season, while the Valor improve to 3-2.
Monday, October 3rd 2022, 8:43 AM CDT
By Peru State Athletics 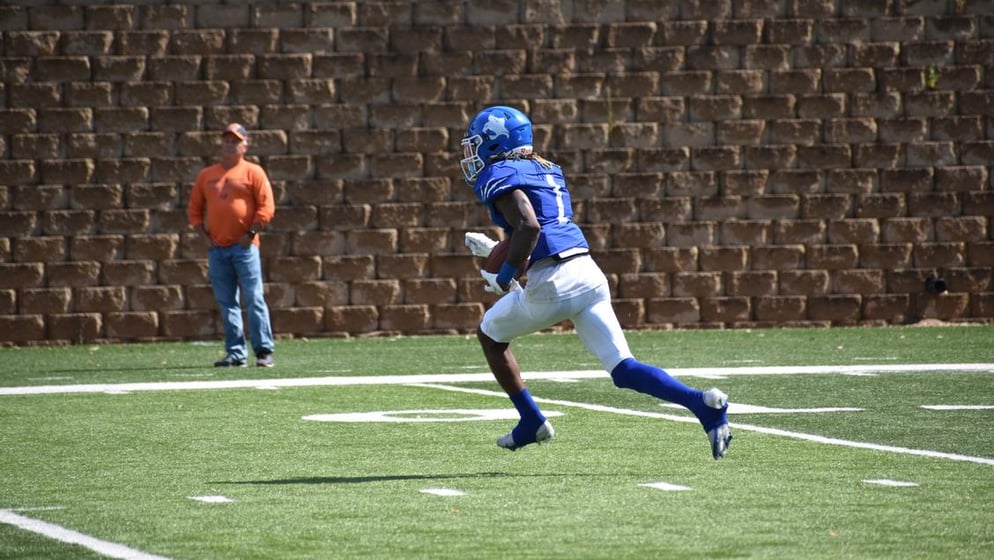 (Peru, Neb.)—On Saturday, October 1, it was a somber homecoming as the Peru State football team was shut out by Evangel 28-0. The Bobcats fall to 2-4 on the season, while the Valor improve to 3-2.

Below is a breakdown of how the game went.

Peru State's opening drive was promising as Desmond Sams (Mandeville, La.) scampered for a 40-yard gain as that put the 'Cats in the red zone. Then a 14-yard pass from Grant Gutschow (Elkhorn) to Sams had the Bobcats at the one.

Unfortunately, the Valor defense was able to stop the Bobcats from entering the end zone on four straight plays. The Bobcat defense stepped up after only allowing one first down, a tackle for loss by Gerald Smith (Baltimore, MD.) and Cedric Terrell (Florissant, Mo.) set the Valor offense back as they were forced to punt.

Another steady drive and a gutsy third down conversion on a pass to Jarrius Anderson (Cordova, Tenn.) had the 'Cats in Valor territory again. The drive would stall out as Peru State turned the ball over on downs.

On the next Evangel possession, they marched down the field with the help of some penalties and a 30-yard touchdown strike would have the Valor leading in the first quarter 7-0.

Peru State's offense would go three-and-out on the next possession. A short punt helped the Valor at the start of the second quarter as a 31-yard rushing touchdown had the Valor with a two-score lead.

Halfway through the second, the Valor marched down the field again and a five-yard touchdown pass had Evangel with a 21-0 lead.

Late in the second quarter with 25 seconds left the Bobcats tried to get something going on offense but were forced to punt and Evangel had a chance for a 43-yard field goal that ended up being short to end the half with a 21-0 score.

In the beginning of the third quarter the Bobcat defense bowed up with a three-and-out of their own. Peru State's offense simply could not find a groove in the game as they would have to punt after just three plays.

The Peru State defense came up big again after another short punt, as a tackle for loss by Nicolas Syms helped the defense get off the field once again. Both teams would struggle to find anything offensively in the third quarter. As there was multiple three-and-outs from both teams.

Peru State threw two interceptions in the third quarter, the second led to a rushing touchdown in the fourth quarter. Evangel then had a commanding 28-0 lead.

Peru State in the fourth quarter executed their third fake punt of the year to perfection as a 42-yard pass completion from Devin Adams (Pembroke Pines, Fla.) to Caleb Jackson (Oakwood, Ga.) had the 'Cats in the red zone.

Peru State's offense would end up going backwards and their tough day continued as they turned the ball over on downs. Evangel essentially ran out the clock for their 28-0 victory.

Gutschow was 10-of-22 for 76 yards and two interceptions. Stacy Livingston (St. Louis, Mo.) was the leading rusher with five carries for 53 yards.

Jackson had the longest reception on the day going for 42 yards.

On the defensive side of the ball Lamarius James  (Vossburg, Miss.) had 12 tackles on the day, seven of which were solo. Clayton Thrasher (Mandeville, La.) had the lone sack. Ka'Von Lofton (Apopka, Fla.) had three pbus on the day.

Peru State is on the bye next week before making the long trek out to Dubuque, Iowa to face Clarke. Kickoff is set for 1:00 p.m., on Saturday, October 15.