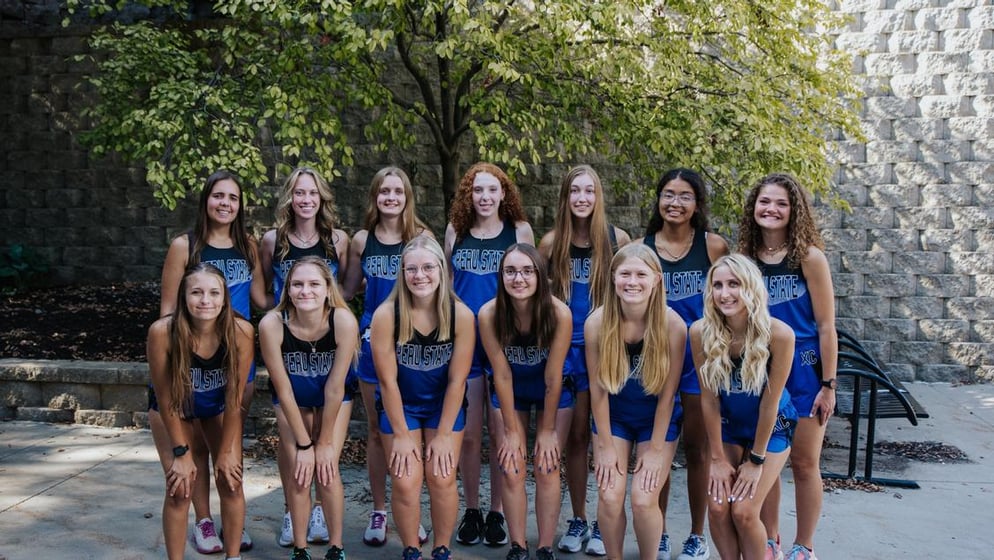 Here is what head coach James Cole said about the situation…

"We had a rough go this weekend. Our bus never showed, and we couldn't get a viable solution to get to the meet until athletes started deciding if they would seek parental consent to allow them to drive themselves," said Cole. "By the time we started working that solution most of the men decided not to go due to having limited time to warmup, if they could even make the start time at all, and a few of the women decided not to participate as well."

"This added a level of stress that can mentally throw off an athlete, especially runners. One male, Alan Simpson; nine of the women; and myself loaded up the gear we needed in three cars and carpooled to the meet. Alan barely made the start line but was able to compete and our nine women did the best they could to complete their pre-meet warmups and get ready with the limited time they had."

Here is what Cole said about the course…

"It was a sunny morning with no cloud cover and hotter than what was projected earlier in the week. The course has several hills along with rolling elevation and few straightaways; definitely not an easy course," Cole said.

Below is a breakdown of how the women and Alan Simpson competed in the race.

Here's what coach Cole said about the women's team…

"The women's team performed right on par with what we saw last week which is a win given the stress, increased heat, increased course difficulty, and limited cloud cover they experienced this week," said coach Cole. "We had two seasonal PRs amongst our returners from Naomi Wilson and Emma Larson and two collegiate personal bests from newcomers Amyra Moxey and Carrin Gramke."

"Comparing this team's Dean White Invite finish with previous Peru State finishes since the program's revival in 2003 shows we are on track with improving the program. Amongst the 16 team finishes we have posted over the last 20 years, the team placed seventh and beat all six teams the program has had compete at this meet since 2012. The team was only beat by former teams that included former Peru State top 10 runners like:  national qualifier Sarah Williams, MCAC All-Conference runner Allison Stockstell, along with Daniel Prchal, Tasha Price, and Brittany Schaefer."

On the men's side the only runner Peru State had competing was Simpson who finished in 24th place in the men's 8K with a run time of 33:20.6.

Here is what Cole said about Simpson's performance…

The men's and women's cross-country team will be back in action this weekend at Briar Cliff this Saturday. The women's race starts at 10:30 a.m., while the men start at 11:15 a.m.