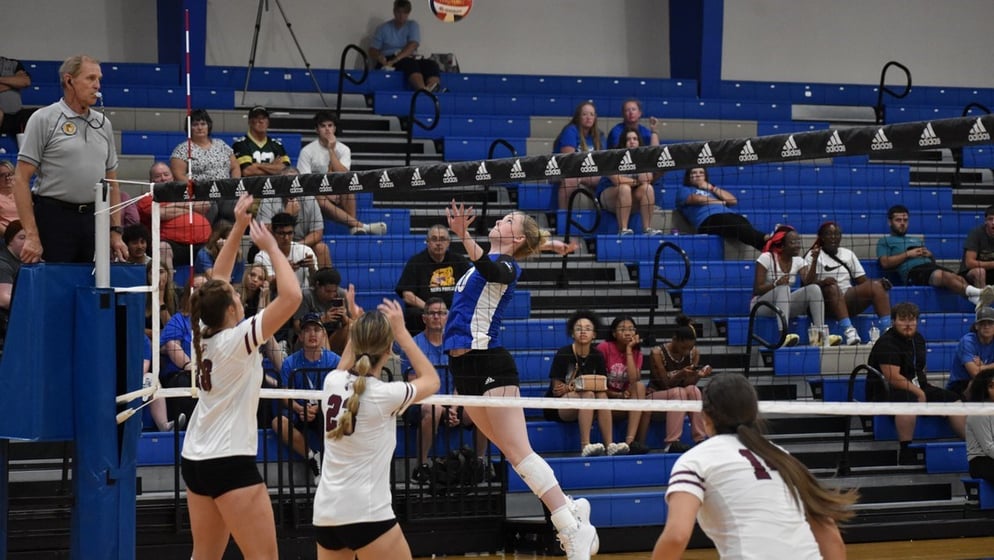 In the first set, Bethany came out fast as they were leading 4-0 early. The Bobcats then went on a 5-1 run of their own, to tie the game at five apiece from a kill by Kylee Fischer (Bellevue). The teams would then trade blows as it would stay tied through much of the first set.

The game was tied at 14, then a quick 3-0 run by the 'Cats had them up 17-14 with a kill by Michelle Beer (Salem) and two errors by the Swedes. The Bobcats ended up going on a 7-1 run to make the score 21-15. A couple of aces from Beer and Sidney Peck (Manitoba, Canada) and another kill from Beer helped extend out the lead.

The Swedes would not go away quietly as they cut the lead back to three trailing 21-18 in the first. Then a kill by Kim Krise, (Briggsdale, Colo.) an ace by Olivia Gordon (Oskaloosa, Iowa) and an error by the Swedes had the 'Cats at match point leading 24-18. The Swedes then went on an 8-0 run to come from behind and take the first set from the Bobcats winning 26-24.

The second set had both teams trading points with each other, until Peru pulled away a little bit leading 11-8 from kills by Krise, Katie Mendick (Bellevue) and Allie Schneider (Humphrey). The Swedes would then tie the game back up at 12 before Peru went on another run.

The 'Cats went on a 7-2 run to lead 20-14 with a help of a few errors from the Swedes, kills by Fischer and Kennedy Miller (Plattsmouth) and a couple aces from Beer and Gordon. The 'Cats would extend their lead out to 23-15, but then Bethany went on a 5-0 run to trail by three 23-20. A kill by Miller and a Bethany error put the set away as the 'Cats tied the match at 1-1.

The Swedes started the third set with a 7-3 lead, then the Bobcats would get the lead within one multiple times before finally taking the lead 17-16 from a kill by Peck and an error on the Swedes.

Bethany then took the lead back as they were up 20-18 late in the third set. An error and two more kills by Beer had that Bobcats regain the lead at 21-20. Beer then helped the 'Cats extend the lead with two more kills and a Schneider ace had Peru State at match point 24-20. A service error helped Peru win set three 25-21.

In the fourth set the Bobcats got out to a 6-3 lead from kills by Miller and Peck. Then Peru in the beginning of the fourth set would be clinging onto a one-point lead before the Swedes took a 13-12 lead. Bethany went on a 5-1 run to take a 16-13 lead. The Bobcats then got within one from a kill by Krise trailing 17-16. The Bobcats then finally took the lead late from a kill by Mendick as Peru State now led 20-19.

Multiple errors and kills by Miller and Krise helped put the Swedes away as the Bobcats won the set 25-21 and won the match 3-1.


Game 2 vs. University of Saint Mary

In the first set of the second game the Spires and Bobcats were going back and forth as the game was tied 8-8 early. USM then started to pull away as they went on a 7-2 run as they led 15-10.

Then the 'Cats went on a 6-1 run to tie the game at 16 all with kills by Krise, Mendick and Schneider. Peru also had two aces from Gordon and Paniagua. The Spires would then get out in front now leading 20-17.

The Bobcats would not go down without a fight as they would get the score within one 22-21, from a few errors by the Spires and kills by Schneider and Fischer. Ultimately, the Spires would pull away winning set one 25-21.

USM would get out to a hot start in set two as they lead 10-4 early. The 'Cats then went on a 4-0 run to pull within two trailing 10-8, with help of a couple kills by Krise and an ace by Gordon.

USM then pulled away a gain leading by three 22-19. The 'Cats would then go on a 4-0 run to take the lead 23-22 from kills by Schneider and Nichols with errors mixed in. The Spires would then take the next three points to win set two 25-23.

Mendick led the way in kills with 11, while Krise and Schneider finished with seven and six respectively. Gordon had four aces while Peck and Paniagua both had one. Krise had three blocks while Beer finished with one.

Schneider finished with 17 assists with Gordon finishing with 13 and Nichols with two.

Nichols finished with 20 digs while Schneider and Peck had 13 and 12 respectively.

"Really proud of how we competed this weekend in our Tri-Match with Bethany and University of St. Mary," said coach Kindle. "We are learning and growing, and no better time for that to happen then during these non-conference matches."

Peru State is now 4-7 overall this season. They have an exhibition match with Wayne State College in Wayne, Neb., on Tuesday, September 13, starting at 6:00 p.m.