The Peru State football shutout No. 18 Central Methodist in their home opener Saturday, September 3, by a score of 24-0. The Bobcats improve to 1-1 overall on the season while the Eagles fall to 0-2.
Tuesday, September 6th 2022, 8:50 AM CDT
By Peru State Athletics 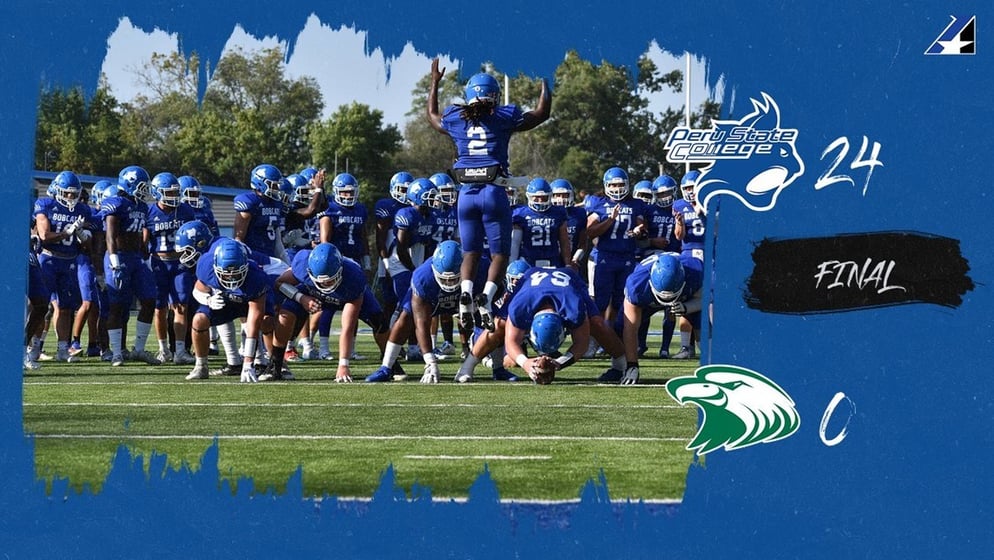 (Peru, Neb.)—The Peru State football shutout No. 18 Central Methodist in their home opener Saturday, September 3, by a score of 24-0. The Bobcats improve to 1-1 overall on the season while the Eagles fall to 0-2.

Here's a breakdown of how the shutout went…

In the first quarter the Bobcats had a nice drive going but stalled out at the Central 33-yard line with a turnover on downs. The Bobcat defense came out ready to play tonight as they forced the Eagles with a three-and-out on their first possession.

The Peru State offense was moving the ball again but then was stopped on fourth down for a second straight time. The 'Cats defense stepped up on third and twelve with a big sack by Aaron Thomas. (River Ridged, La.) The Bobcats had another strong drive by the offense but again had to punt while in Eagle territory.

The special teams showed up in a big way in the second quarter as the Bobcats blocked a punt for a touchdown. Grant Gutschow (Elkhorn) recovered the blocked punt and the 'Cats would take a 7-0 lead. The next drive for the Eagles, the Bobcats forced another three and out as they went backwards.

The Peru State offense then  marched down the field and Stacy Livingston (St. Louis, Mo.) scampered in for a 17-yard rushing touchdown. Central Methodist on their next possession would move the ball a little via some help from penalties but then penalties of their own stopped the Eagles momentum and they would turn the ball over on downs.

Peru State would only muster up one first down on the next possession before they had to punt the ball away. The Bobcats would take a 14-0 lead into the half. The Bobcat defense forced a three-and-out right away in the third quarter. Then a mishandled snap by the CMU punter setup Peru State with great field position.

Unfortunately, the 'Cats would go three-and-out on the next possession. The next Bobcat offensive possession Nathan Barnes (Clarinda, Iowa) hit a 30-yard field goal as Peru State took a 24-0 lead late in the third quarter.

The special teams came up big again in the fourth quarter as TJ Soules (Fort Worth, Tex.) recovered a fumbled punt putting the 'Cats offense in a great position to score. Unfortunately, a pick on the goal line stopped the Bobcats from punching it in. The Eagles then had a long 12 play drive but the Peru State defense then forced another turnover on downs. Peru State would go on to win the game 24-0.

Mueller was 12-for-22 throwing for 125 yards as he had one touchdown and one interception. Livingston led the way in rushing with 17 carries for 77 yards and one touchdown.

Garrison Dodge (Oakland) led the way in receiving with three receptions for 38 yards. Anderson had the lone receiving touchdown.

On defense Jeremiah Dilbert (Beaufort, S.C.) led the way in tackles with ten on the day. Devin Adams had 3.5 tackles for loss. (Pembroke Pines, Fla.) Adams and Larry Graham (Fargo, N.D.) each had two sacks. Thomas had two pbus. Metelus had the lone interception.

Peru State hits the road next week as they will face Benedictine College in Atchison, Kansas, with a 1:00 p.m., kickoff.