On a quiet Saturday in an Omaha hotel, about 50 people gathered in a ballroom to learn about elections.
Sunday, September 4th 2022, 9:56 AM CDT
By Associated Press 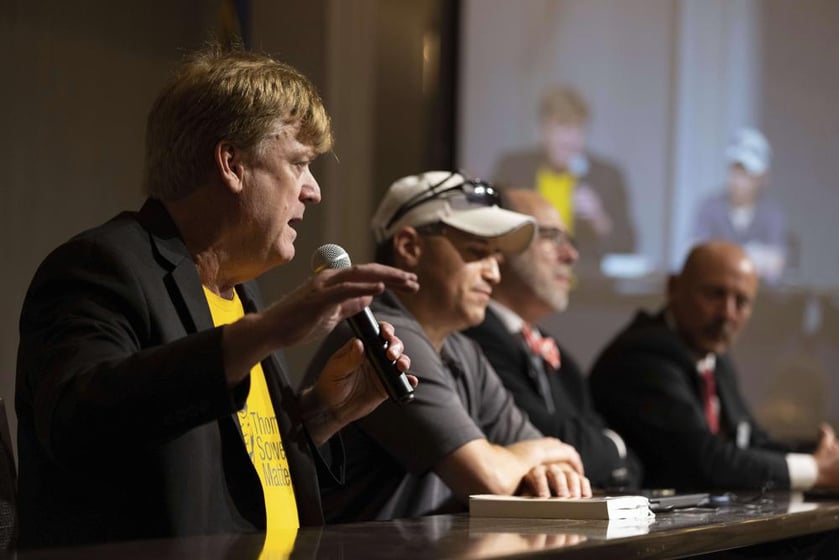 OMAHA, Neb. (AP) — On a quiet Saturday in an Omaha hotel, about 50 people gathered in a ballroom to learn about elections.

The subject wasn’t voter registration drives or poll worker volunteer training. Instead, they paid $25 each to listen to panelists lay out conspiracy theories about voting machines and rigged election results. In language that sometimes leaned into violent imagery, some panelists called on those attending to join what they framed as a battle between good and evil.

Among those in the audience was Melissa Sauder, who drove nearly 350 miles from the small western Nebraska town of Grant with her 13-year-old daughter. After years of combing internet sites, listening to podcasts and reading conservative media reports, Sauder wanted to learn more about what she believes are serious problems with the integrity of U.S. elections.

She can’t shake the belief that voting machines are being manipulated even in her home county, where then-President Donald Trump won 85% of the vote in 2020.

“I just don’t know the truth because it’s not open and apparent, and it’s not transparent to us,” said Sauder, 38. “We are trusting people who are trusting the wrong people.”

It’s a sentiment now shared by millions of people in the United States after relentless attacks on the outcome of the 2020 presidential election by Trump and his allies. Nearly two years after that election, no evidence has emerged to suggest widespread fraud or manipulation while reviews in state after state have upheld the results showing President Joe Biden won.

Even so, the attacks and falsehoods have made an impact: An Associated Press-NORC Center for Public Affairs Research poll from 2021 found that about two-thirds of Republicans say they do not think Biden was legitimately elected.

Events like the one held Aug. 27 in Nebraska’s largest city are one reason why.

Billed as the “Nebraska Election Integrity Forum,” the conference featured some of the nation’s most prominent figures pushing conspiracy theories that the last presidential election was stolen from Trump through widespread fraud or manipulation of voting machines. It was just one of dozens of similar events that have been held around the country for the better part of a year.

Despite the relatively light attendance, the events are often livestreamed and recorded, ensuring they can reach a wide audience.

Over eight hours with only a brief lunch break, attendees were deluged with election conspiracies, complete with charts and slide shows. Speakers talked about tampering of voting machines or the systems that store voter rolls, ballot-box stuffing and massive numbers of votes cast by dead people and non-U.S. citizens -- all theories that have been debunked.

There is no evidence of widespread fraud or tampering with election equipment that could have affected the outcome of the 2020 election, in which Biden won both the popular vote — topping the Republican incumbent by more than 7 million nationwide — and the Electoral College count. Numerous official reviews and audits in the six battleground states where Trump challenged his loss have upheld the validity of the results. Judges, including some appointed by Trump, dismissed numerous lawsuits making various claims of fraud and wrongdoing.

Trump’s former attorney general, William Barr, and other advisers and top government officials told him there was no evidence of widespread fraud. As part of the U.S. House committee’s investigation of the riot at the U.S. Capitol on Jan. 6, 2021, Barr told congressional investigators that the claims by Trump allies surrounding voting machines were disturbing but also were “made in such a sensational way that they obviously were influencing a lot of people.” He added that the false claims were doing a “grave disservice to the country.”

Many local and state election officials have said the conspiracies have already led to rampant misinformation, vitriol aimed at election workers and calls to toss out voting equipment. Trey Grayson, a former Republican secretary of state in Kentucky who is critical of those spreading conspiracy theories, said previous election-year attacks were focused on candidates or political parties but now are targeted at election administration.

“There are a lot of really bad actors here that are trying to undermine confidence in a system. It is dangerous,” he said.

Despite all the evidence that the 2020 election was fair and the results accurate, the conspiracy theories have persuaded many Republicans otherwise — with real world consequences.

In New Mexico this year, fears of voting machines being manipulated led one rural county commission to threaten that it would vote against certifying the results of its primary election even though the county clerk insisted the results were accurate. In Nevada, a rural county is pushing ahead with a plan to count by hand its thousands of ballots this November, a lengthy and painstaking process that ironically could lead to errors.

At the Omaha conference, evidence of an accurate election was ignored as speaker after speaker told attendees that machines are rigged and elections are stolen. One of the event’s headliners was Patrick Byrne, the former CEO of Overstock.com who said he has spent some $20 million of his own money since 2020 trying to prove that voting machines were manipulated in that election and remain susceptible to tampering.

Wearing jeans and a black suit jacket over a yellow T-shirt, Byrne began his presentation by saying voting machines are vulnerable to hacking and outlining various security failures associated with them.

That any technology is vulnerable, including voting machines, is not in dispute. State and local election officials throughout the U.S. have focused on improving their security defenses with help from the federal government. After the 2016 election, the government designated voting systems as “critical infrastructure” -- on par with the nation’s banks, dams and nuclear power plants. Government and election security experts have declared the 2020 election as “the most secure in American history.”

But Byrne and some of the other speakers said they believe government has been corrupted and cannot be trusted. In his remarks, he complained about those who say fraud did not occur in 2020 and about journalists who report that, labeling them “election fraud deniers.”

He accused critics of “trying to incite violence” and later told the attendees that China is planning to take over the U.S. by 2030.

“I can promise, every nice home in the United States, there’s someone in China who already has a deed to your home,” Byrne said, eliciting gasps from the crowd.

Another main speaker at the Omaha event was Douglas Frank, an Ohio math and science educator who has been traveling the country engaging with community groups and meeting with local election officials, offering to examine and analyze their voting systems.

Commonly known as Dr. Frank because of his doctorate in chemistry, he gives off a professorial vibe with his signature bow tie and glasses. He peppers his presentations with algorithms, line graphs and charts that he claims prove elections are corrupt. Frank said he has been to 43 states over the past 20 months.

He had harsh words for some of those who oversee elections at the state level.

“I like to tell people that we have evil secretaries of states,” Frank said. “We have a few of those in our country, and it’s sort of like World War II — when the war’s over, we need to have Nuremberg trials and we need to have firing squads, OK? I’m looking forward to the trials, OK?”

State and local election officials have faced a barrage of harassment and death threats since the 2020 election. That has led some to quit or retire, raising concerns about a loss of experience heading into the November general election, along with worries that their replacements may seek to meddle in elections or tamper with voting systems.

Also addressing the audience was Tina Peters, the clerk of Mesa County, Colorado, who has been charged in a security breach of voting systems in her election office. She has claimed she had an obligation to investigate and produced reports purporting to show tampering with voting systems, but her claims have been debunked by local authorities and experts.

During her remarks over video conference, Peters impugned the integrity of judges who have rejected dozens of legal efforts to challenge the 2020 presidential results. She urged citizens to join in the fight.

“You can’t be afraid of going to jail,” Peters told the crowd. “They can’t get us all. Be bold. Be courageous. The Lord is on our side.”

Frank, in an online post after the event, apologized for remarks he made during the forum about Nebraska’s chief election official, Secretary of State Bob Evnen. Frank had called Evnen, a Republican, incompetent and said the official had “made a fool of himself” by refuting Frank’s assertions that called into question the security of Nebraska’s election.

One of the organizers of the event was Robert Borer, who unsuccessfully challenged Evnen in Nebraska’s GOP primary this year. Borer said he ran because he was convinced that state election officials were not doing enough to address fraud and he believes the 2020 election was stolen.

“The whole objective of that election was to take down Trump,” he said.

Since losing his bid to become the state’s top election official, Borer has launched a campaign for Nebraska governor as a write-in candidate. This means his name will not appear on the November ballot, which, for him and his supporters, is entirely the point.

“We don’t want the machines to count our votes,” Borer said. “If someone casts a write-in vote, the machine has to kick that out. It cannot read that vote, so they have to count that manually.”

The Omaha conference was sponsored by American Citizens & Candidates Forum for Election Integrity, which has hosted more than a dozen such gatherings since the 2020 election.

The event was a study in contradictions.

Speakers insisted the issue of election integrity transcended party politics, with many repeating “this is not about Republicans or Democrats,” before maligning both Democrats and so-called RINOs -- an acronym for “Republicans in name only” -- as “evil“ or “criminal.”

Speakers insisted that they rejected violence, yet they were throwing out menacing terms.

Mark Finchem, the Republican nominee for secretary of state in Arizona, appeared remotely and spoke about his efforts to compel his state to ditch voting machines and switch to hand-counting ballots. Election experts say that process is time-consuming, will delay results and is unnecessary due to the rigorous testing that occurs before and after an election to ensure the equipment is working correctly.

“We have a fight on our hands,” Finchem told attendees. “The establishment and the Democrats want to do everything they can to subvert our elections.”

The speakers urged those in attendance to take action. That includes getting to know their local election officials and local sheriff, and to volunteer to be poll watchers for the November election with the goal of reporting any activity they think could be fraudulent.

Omaha resident Kathy Austin said she recently submitted her name to serve as a poll worker, but has not heard back from local election officials. She is convinced that the 2020 election was stolen from Trump.

“I had not really been involved in politics before the 2020 election,” said Austin, 75. That began to change after she saw posts making claims of election fraud on the social media platform Telegram, which is popular with Trump supporters.

“Then I talked to different people,” she said. “And the more I learned, the more it became clear there is a problem.”