On Tuesday, August 30, the Peru State volleyball team upset No. 21 Grand View in five sets. The Bobcats improve to 1-3, overall 1-0 in the Heart of America Athletic Conference on the season while the Vikings fall to 1-4 and 0-1 on the season.
Thursday, September 1st 2022, 8:50 AM CDT
By Peru State Athletics 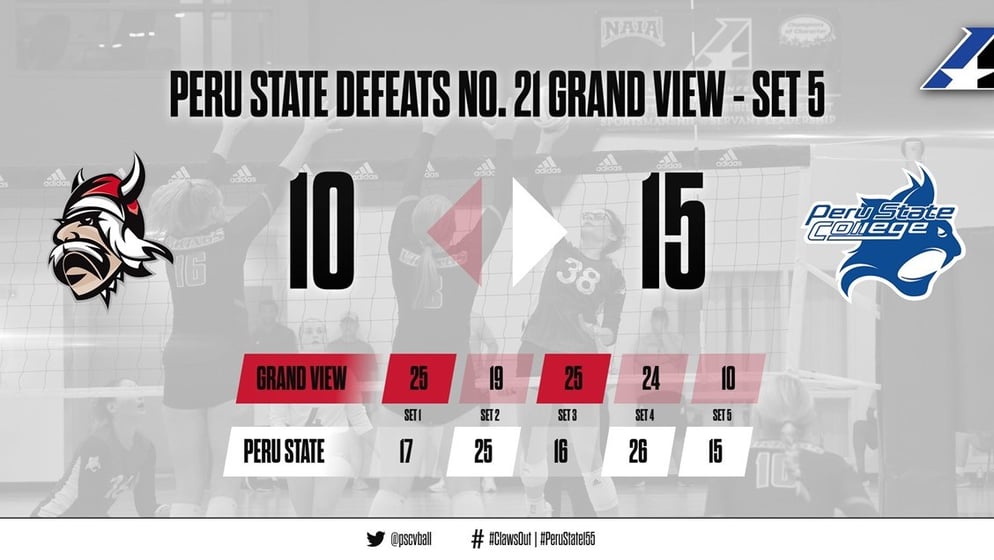 (Peru, Neb.)—On Tuesday, August 30, the Peru State volleyball team upset No. 21 Grand View in five sets. The Bobcats improve to 1-3, overall 1-0 in the Heart of America Athletic Conference on the season while the Vikings fall to 1-4 and 0-1 on the season.

Below is a breakdown of how each set went:

In the first set after the first few points Peru State was holding onto a 6-3 lead, but then Grand View went on a 6-0 run to take a 9-6 lead. The Vikings would then take control of the first set as they went on an 8-2 run as the lead stretched to ten 18-8.

Grand View started out the second hot as they got out to an 8-4 lead, but Peru State punched back with a 7-1 run of their own to take a 10-9 lead off a kill from Mendick. The Bobcats and the Vikings would then trade blows in the middle of set two. Peru State then went on a 5-1 run to regain the lead 19-16 after a couple of errors from the Vikings.

The Bobcats went on a final 6-3 run as a couple of kills by Mendick helped the Bobcats tie the match at 1-1 winning set two 25-19.

The Vikings came back in the start of third set with vengeance as they gained a 9-3 lead early in set number three.

The Bobcats then climbed out of the hole with a 6-1 run of their own as a kill by Allie Schneider (Humphrey) and an error on the Vikings as the Bobcats trailed by one 10-9. The Vikings then went on a 7-1 run to extend their lead out 17-10. Grand View would keep Peru State at arm's length for most of the third set getting out to a 22-13 lead.

Peru State was unable to muster another run as they fell in the third set 25-16.

It was a back-and-forth affair for much of the fourth set as a heated battle between the Vikings and the Bobcats continued. Grand View in the middle of the fourth set would extend their lead out to five leading 16-11. Then a rally by the Bobcats trimmed the Viking lead to one from a Kim Krise (Briggsdale, Colo.) kill and a Viking error had the score at 17-16.

The Vikings then tried to pull away again as they clung to a 20-17 lead, but the Bobcats would not be denied as a service error, kill by Schneider and an ace by Chantal Paniagua (Santo Domingo, D.R.) tied the game at 20.

Then both teams would trade points as the score sat 24-24 in a raucous Al Wheeler Activity Center. Kills by Lauren Moubray (Mission, Tex.) and Krise had the AWAC erupt as Peru State sent the game into a fifth set with No. 21 Grand View on their heels.

The fifth set started with the Bobcats racing out to a 6-2 lead, but the No. 21 team in the country would not go quietly as a 4-0 run had the set tied at six. Peru State and Grand View then traded blows one final time as the score was knotted at ten. A 5-0 run from the Bobcats as kills from Mendick and Schneider, and blocks by Michelle Beer (Salem) and Mendick helped the 'Cats with a decisive 15-10 set win.

Here's what coach Kindle had to say about the upset win…

"So incredible proud of ladies. They battled together and for each other last night. They were confident, kept their composure and just went out there and played the game they love," said Coach Kindle. "This is just the start. We still have so much to learn and grow, but just continuing to trust the process."

Leading the way in kills was Mendick with 14, behind her was Beer with 10 and Schneider with nine. Mattie Nicols (Auburn) had three aces on the night, while Olivia Gordon (Oskaloosa, Iowa) and Paniagua ended up with two each.

The Bobcats hit the road this weekend for the Showdown in the Woods Tournament in Indiana. They have matches against Grace Christian University and Eureka College on Friday, September 2, at 4:00 and 8:00 p.m. respectively. On Saturday, September 3, they will play the host school St. Mary of the Woods College and will finish the tournament with University of Maine at Fort Kent. Game times are at 10:00 a.m. and Noon.