#18 Creighton volleyball tops Wyoming for Rumble in the Rockies title

Creighton saved a set point in the third set and left no doubt in the fourth frame to pull out a 3-1 road win at Wyoming to earn the Rumble in the Rockies title on Saturday night in Laramie, Wyo.
Sunday, August 28th 2022, 10:47 AM CDT
Monday, August 29th 2022, 7:40 AM CDT
By Creighton University 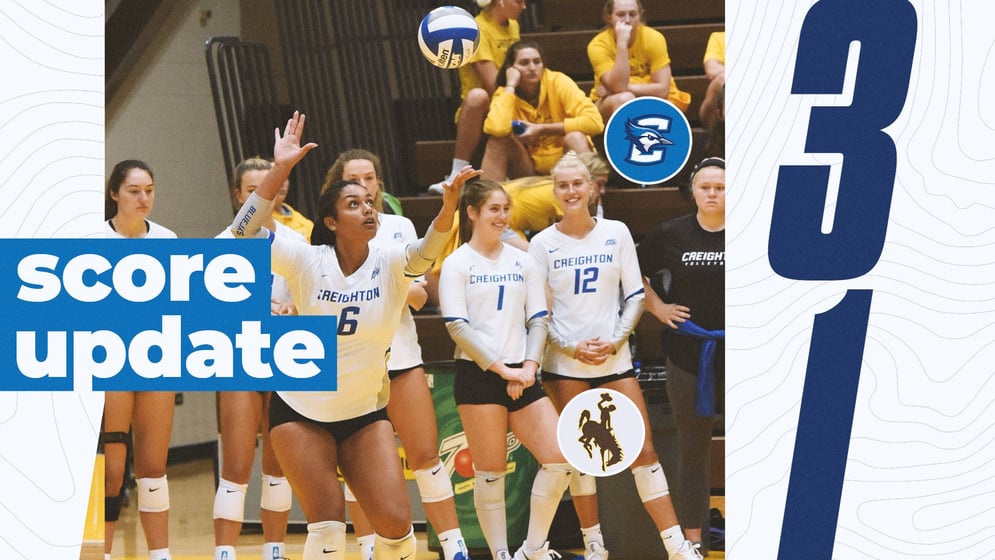 LARAMIE, Wyo. -- Creighton saved a set point in the third set and left no doubt in the fourth frame to pull out a 3-1 road win at Wyoming to earn the Rumble in the Rockies title on Saturday night in Laramie, Wyo.

Sophomore Norah Sis was named Tournament MVP and joined on the All-Tournament Team by teammates Keeley Davis and Kendra Wait.

"I thought Wyoming really did a great job of just outworking us at different times and kicked us in the teeth to start, but I really liked how we responded after losing a really bad game in game one," said Creighton head coach Kirsten Bernthal Booth. "I liked that we were able to regroup. I didn't like that we gave up the lead in game three but I liked how we battled to hold onto that thing."

Sis led Creighton with 22 kills, one off her career-high, while Davis made big plays in crunch time and finished with 10 digs, eight kills, four aces and four blocks. Wait contributed her first double-double of the fall with 45 assists and 12 digs while adding six kills and Kiana Schmitt matched her career-best with a dozen kills. Creighton had 58 kills, eight aces, 68 digs and eight blocks on .252 hitting.

Wyoming (0-3) hit .303 to control the opening set before Creighton (3-0) returned the favor with a decisive 25-9 victory which saw Davis serve 12 times in two extended runs behind the line. Sis had seven kills and Schmitt added six kills on .750 hitting as five Bluejays had multiple kills. CU hit .514 in the second set.

The third game proved pivotal. Creighton led 17-13 before a 6-0 Wyoming run put the hosts in front by a pair. CU had chances to close the set at 24-23, 25-24, 26-25 and 27-26, only to have Wyoming side out each time. CU's apparent 28-27 lead disappeared after a replay review when KC McMahon's ball down the right sideline was overturned to in, and a point for the Cowgirls. Wyoming was unable to capitalize on their set point chance though, as Davis put down a kill through the block and two points later ended the 30-28 victory with an ace. Sis had seven kills and three blocks in the frame as both teams had 18 kills. The clubs combined for 58 digs.

Creighton never trailed in the final set, pulling away from a 13-11 score with a match-ending 12-2 spurt. Ellie Bolton dealt back-to-back aces late in the match before freshman Ava Martin's kill ended the contest and clinched CU's seventh tournament title since the calendar turned to 2021.