Dodge and Gyhra named July Bobcat Athletes of the Month

The Peru State athletic department recently announced that Garrison Dodge (Oakland) and Addison Gyhra (Auburn) were named the July Bobcat Athletes of the Month. In the month of July both Dodge and Gyhra were nominated for awards.
Thursday, August 11th 2022, 10:21 AM CDT
By Peru State Athletics 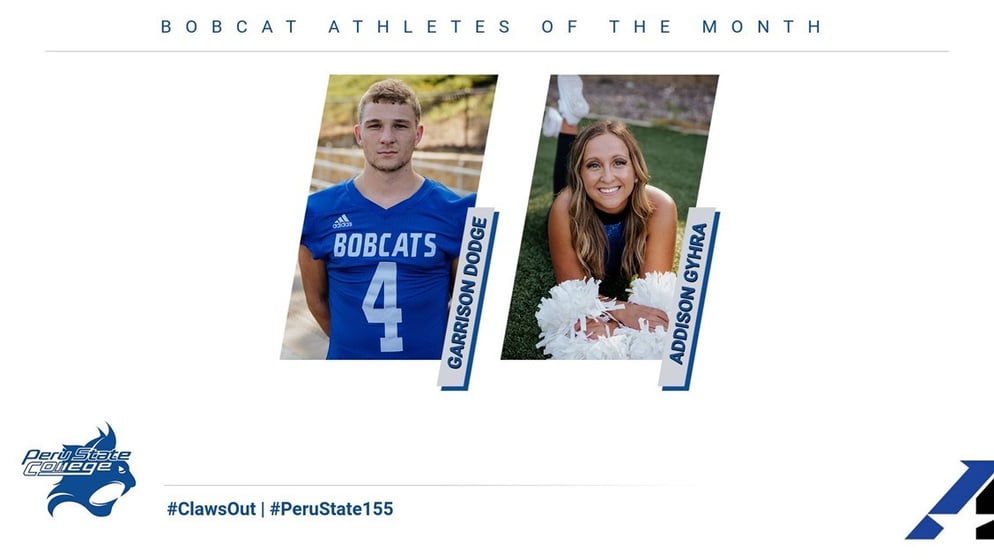 (Peru, Neb.)—The Peru State athletic department recently announced that Garrison Dodge (Oakland) and Addison Gyhra (Auburn) were named the July Bobcat Athletes of the Month. In the month of July both Dodge and Gyhra were nominated for awards.

Dodge was nominated for the LeRoy Walker Champions of Character Award. He ended up winning the Heart Nomination to be sent to the NAIA at the Heart of America Athletic Conference Summit on Monday, August 1, in Olathe, Kan.

"He is the first winner of the Walker award in four years when Dan Boshart (Wood River/Bruning) won the award in 2018," according to an earlier press release

"The NAIA Dr. LeRoy Walker Champions of Character Award for student-athletes is one of the most prestigious awards in the NAIA and was created in association with National Sports Foundation, a group of sports organizations that promote and recognize sportsmanship. Dr. Walker was a former president of the NAIA and president emeritus of the U.S. Olympic Committee. The award honors outstanding student-athletes for their academics, athletics, leadership, and dedication to living the core values of Champions of Character," according to the NAIA.

Below is the criteria you need to have to be nominated for the award:

"To be nominated, a student-athlete must be at least a junior in academic status with a 3.0 grade point average or higher; be involved on campus and community leadership; embrace the five core values of the NAIA Champions of Character and have athletic achievements," according to the NAIA.

Dodge's crowning achievement when it comes to community service is his "Athletes 4 Children," that he started back in 2018.

"So far, his efforts have helped raise over $18,000 for the Children's Hospital in Omaha where he actually spent quite some time in the NICU as a baby. This effort has continued to expand over the years with the concept of securing student-athletes to pledge for their outstanding play," stated in a previous press release.

Dodge will have a chance to win the national award in September when the NAIA does their National Awards Day.

Gyhra was nominated for the female A.O. Duer award which recognizes academic and athletic excellence by a junior student athlete in any sport.

"Named in honor of the NAIA's former executive secretary for his 26 years of service to the Association, the A.O. Duer Scholarship Award has been presented since 1967 to one male and one female junior student-athlete in any sport who have excelled in scholarship, character, and citizenship," according to the NAIA.

Below is the criteria for the A.O. Duer Award:

1.         Must be certified by the registrar as having an overall GPA of at least 3.75 (on a 4.00 scale) and must have attained junior standing academically.
2.         Selection shall be based on scholarship, character, citizenship and playing ability.

Gyhra was a member of the competitive dance team, and she will be student teaching this fall in Syracuse.

On behalf of the Peru State athletic department, we want to congratulate both student athletes on such wonderful achievements.