From groupie to Gorat’s: Omaha waitress reflects on her place in rock n’ roll history

A woman who once hung with Van Halen and Guns 'n Roses and now is Warren Buffett's favored waitress at Gorat's Steakhouse in Omaha.
Friday, July 29th 2022, 9:19 AM CDT
By Emma Schartz, Flatwater Free Press 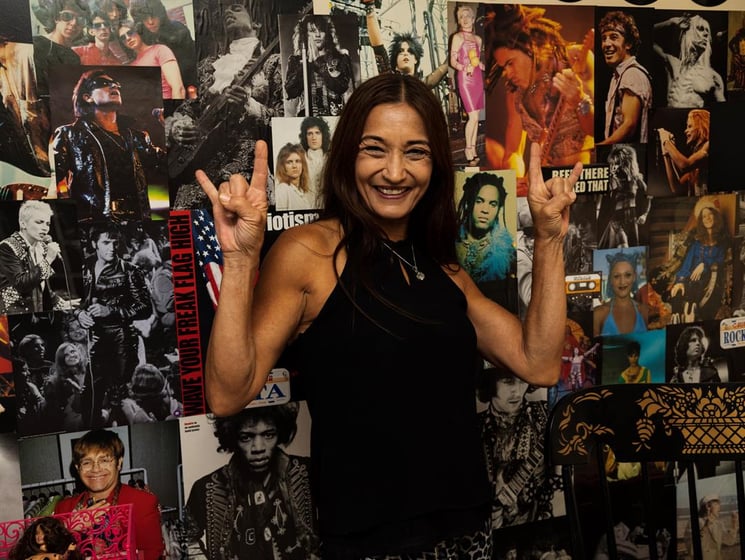 Kucirek poses in front of a backdrop in her home studio where she films content for social media.
Photo by Jazari Kual/Flatwater Free Press

Rita Kucirek kneels on the floor in her Omaha basement, flipping through a handful of homemade photo albums. Between photos of her teenage self posing with family members and laughing with friends, familiar faces appear.

There’s Rita meeting Ozzy Osbourne. Rita hugging Tommy Lee. Rita chatting with Steven Tyler. Rita flashing a grin with Bret Michaels. She pulls out scrapbooks, filled with concert ticket stubs and backstage passes from the 1980s. The walls around her are filled with framed setlists, guitar picks and the faces of the biggest rock stars of the 20th century.

Kucirek moves past piles of vinyl records. She has a story for each poster. She stops at a signed photo of Pamela Des Barres, one of the most famous self-proclaimed groupies.

“She urges women to write and to be writers, and I love that about her,” Kucirek said. “To tell their stories, whatever it is.”

Rita’s story is this: She’s a well-known longtime waitress at Omaha’s Gorat’s Steakhouse – the only waitress allowed to wait on the old-school steakhouse’s most famous customer, Warren Buffett. She’s a mom. She’s a published author of a wild memoir under her pen name, Rita Rae Roxx, that details running away to Los Angeles, partying with KISS, and riding on the back of David Lee Roth’s motorcycle.

Because this 57-year-old’s den of memories holds the tales of a young girl from Omaha who loved rock and roll – and then spent decades as one of America’s most dedicated rock groupies.

She hates the word “groupie.”

“It’s a slang term. So to me, it’s kind of dismissing me, it’s kind of just like, she’s just a groupie, so I don’t like it,” she said. “To me, I’m a professional guest. Because look…I’ve hung out with everybody, I’ve gone out with a lot of people. I still get to people.”

Born in 1965 and raised in Omaha, Kucirek loved “American Bandstand” and pop music like the Jackson Five and Cher. She was grounded often, and listening to records in her bedroom became her favorite pastime. Soon after, Kucirek started attending concerts. On a hot August night in 1980, Kucirek and two friends went to see Alice Cooper at the Civic Auditorium. Billy Squier, a then up-and-coming musician, opened the show. As he left the stage, Kucirek leaned over the railing and asked to meet him. Security guards invited her and her friends backstage, and eventually, Squier brought Kucirek to his tour bus.

She had turned fifteen three weeks before.

Kucirek began high school that year at Omaha Central. During class, she looked out the windows and watched as bands pulled into the Civic Auditorium for sound check. After the school bell rang, Kucirek was hanging around the stagehands and security guards, forming friendships with behind-the-scenes crews that would become her ticket to backstage access.

She continued to attend concerts across the Midwest, driving across states to see her favorite bands. Kucirek made her way backstage with Foreigner, Ozzy Osbourne, Mötley Crüe and Poison, among others, often bribing crew members with cocaine or marijuana or receiving a spot on the guest list from a musician. Kucirek fell in love with David Lee Roth of Van Halen, sold one of her earrings to Steven Tyler for $100, and was asked by Jon Bon Jovi to sew clothes for his upcoming tour.

“I felt like a sex symbol,” Kucirek said. “I didn’t have any goals or really a life plan at that time, because I thought I was going to be married to a rock star. But now I realize it’s a very toxic, abusive environment for at least some people.”

Kucirek graduated high school in 1983 and attended Metropolitan Community College for fashion design. In 1987, she moved to Los Angeles to immerse herself further in the music scene on Sunset Boulevard.

While in California, Kucirek heard bands like Guns N’ Roses and Warrant before their mainstream breaks. She partied with Sylvester Stallone and Rick James, and worked as a waitress in Hollywood, serving MC Hammer. She dated Prince’s half brother Duane Nelson and Eddie Murphy’s brother Charlie Murphy – she has the framed love poem to prove it.

Kucirek says she once confronted Suge Knight about a poor tip on a large bill, getting an extra $40 out of the infamous and violent Death Row Records co-founder.

There was glitz in Kucirek’s Hollywood lifestyle. She lived, for example, in Clark Gable’s former estate. There was darkness too. By the 1990s, she was using cocaine regularly, and eventually returned to Omaha in 2000 for a year to care for her father.

“I just felt like I needed to get back to who I was and do some healing,” Kucirek said.

In 2002, Kucirek made her way back to Omaha for good. She quit drinking, cut her smoking in half, and started roller skating and biking all over the city. Kuricek became a mother and raised two children.

In 2005, Kucirek read a newspaper ad for Gorat’s. The steakhouse was seeking waitresses. She applied multiple times, one day walking through the back kitchen doors, where she convinced one of the cooks to help her get hired.

She’s been at Gorat’s since, building a group of loyal customers – Rita’s own restaurant groupies, if you will.

“People have been telling me to write a book about all my rock n’ roll stories and meeting all the rockstars all these years,” Kucirek said. “So one day, I bought that computer and figured that was my sign to do it.”

Kucirek wrote in the pre-dawn hours of the morning, working before her kids woke up. She completed the first draft in a year, and published the book with local publishing company Concierge Marketing Inc.

“Once Upon a Rock Star: Backstage Passes in the Heavy Metal Eighties–Big Hair, Bad Boys (and One Bad Girl)” told the story of Kucirek’s childhood and young adult years in Omaha, featuring photos and scanned tickets of concerts and rock stars. Kucirek changed some of the local names to protect their privacy. She still received a bit of backlash from some old concert pals.

Fans of featured bands reached out to Kucirek over social media. Some are in awe at her time spent with their idols. Others get mad at her unfavorable characterizations. One fan of Mötley Crüe member Nikki Sixx commented on Twitter in response to Kucirek’s story about an unconsented groping.

“First of all, Nikki Sixx is a public figure,” Kucirek said in response. “Second of all, this is my story about my life, and he happened to be in it. Third of all, it’s not like he wrote ‘Girls, Girls, Girls’ sitting in church on a Sunday morning.”

Kucirek’s book has reached Omahans of local and national acclaim. While working at Gorat’s, she sold a copy of her book to Warren Buffett’s security guard. The following week, Buffett came to lunch three days in a row at Gorat’s, each time asking for the waitress who hung out with rockstars. Now, Kucirek is Buffett’s waitress whenever he dines at Gorat’s, serving Bill Gates, Alexander Payne and Giorgio Armani in the past decade.

“She caters to others, she gets them what they need, she checks to make sure everything’s okay with the food,” said Lisa Caveye, Gorat’s hostess and an employee of the steakhouse for the past 58 years. “Her t’s are crossed, her i’s are dotted when she waits on customers, that’s Mr. Buffett included.”

Kucirek’s love of live music has not died since returning to Omaha. She still sees her old favorite bands when they go on tour. She’s added Post Malone and Machine Gun Kelly to her list of new artists she rocks out to. For Kucirek, the growing prices of tickets and meet and greet passes detracts from the relationships between artists and fans.

“It’s become very smoke and mirrors,” Kucirek said. “I’d rather have it be more rock n’ roll than something that’s every single night the same thing, the same words, the same set, the same movements, the same looks. You know when it's just repetition.”

This summer, Kucirek went to a Mötley Crüe concert in Kansas City. Drummer Tommy Lee came onstage, and asked the women of the crowd to lift up their shirts, which was then broadcast on the stadium Jumbotron.

The woman once known as Rockin’ Rita no longer finds that cute.

“It’s so weird how the double standards are. It just really ruined the concert for me,” she said. “Because I thought, come on man. How old are you? 60 years old…and you want the…women in the audience, they’re all drunk and wasted, to degrade themselves by showing you their (breasts) and being put up on the Jumbotron for everybody to see.”

“Listen…who am I to speak now, you know, for all the stuff that I did,” she said. “But come on, man! This is a different time.”

On nights when there’s no concert, you can find Kucirek whirling through Gorat’s. She half-walks, half-jogs around the dining room, dropping drinks off one table and steaks off at the next. She teases the line cooks and lugs a cardboard cutout of Warren Buffett around for out-of-town guests. One table gets her talking about a recent concert, and Kucirek whips out a copy of her book – the book has appeared as if from nowhere – for a new group of readers to gawk over.

Rita has dreams beyond the steakhouse.

She’d like to have a movie or TV series adapted from her book. And she’d like to attend more shows like her very first – Aerosmith in 1979 – and feel what she felt then.

“It’s the adrenaline, because when you’re in front of a concert, they’re taking you into their world,” Kucirek said. “I just absorb it all, so it’s…entering another realm of consciousness.”