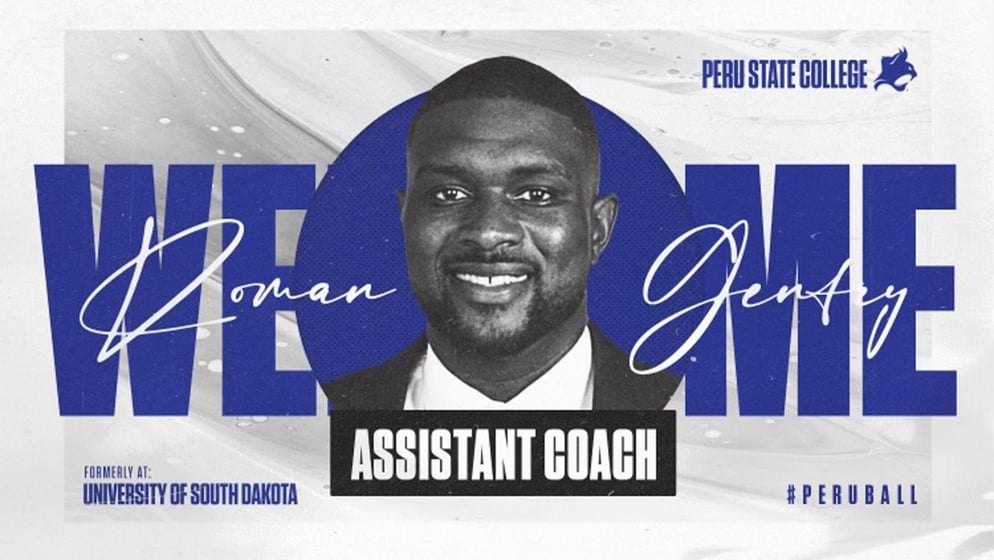 (Peru, Neb.)—Peru State men's basketball coach Bob Ludwig has recently announced the hiring of Roman Gentry as the assistant men's basketball coach. Gentry is from Sioux City, Iowa and graduated from the University of South Dakota. Gentry has eight years of coaching experience at the NCAA level between DI and DII.

Gentry was previously at the University of South Dakota as an assistant coach for the 2021-22 season. The Coyotes were 19-12 overall last season with an 11-7 record in the Summit League. While at his alma mater, he coached four All-Summit League players in Kruz Perrott-Hunt and Mason Archambault (2nd Team), Tasos Kamateros (Honorable Mention) and Boogie Anderson (All-Defensive Team). Before his most recent stint at USD, he was an assistant coach at Concordia St. Paul (Minn.) from 2014-2021 in the Northern Sun Conference.

While at CSP, he helped lead the Golden Bears to a conference tournament berth every year except one. In his first season with the team, he helped them to a 19-11 record. He also coached four players whom earned All-NSIC Honors and 12 student-athletes who earned NSIC All-Academic Honors.

Gentry was a former player for USD where he averaged 17.6 ppg and was First Team All-Great West.

"I am absolutely thrilled about adding Roman Gentry to our staff as our new assistant. This hire elevates our program immediately," said Ludwig. "Roman has great experience as both a player and coach in the greater Midwest, is a proven recruiter both locally and nationally, and will be instrumental in the development of our guards. He will help in every facet of our program."

"I could not be more excited to get started working with our student athletes here at Peru State College," said Gentry. "I cannot wait to hit the ground running with Coach Ludwig and his staff.  Go Bobcats!"