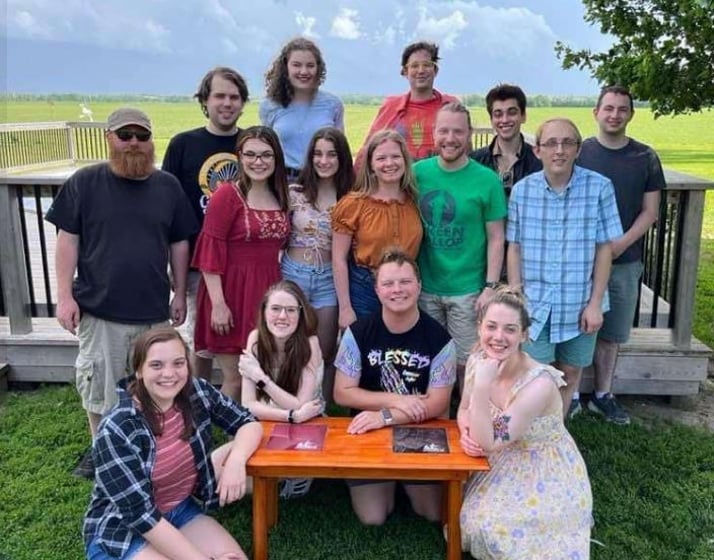 BROWNVILLE - The Brownville Village Theatre is celebrating its 55th season with four plays and one musical June 10 through Aug. 14.

BVT is proud to produce four plays and one musical, running June 10th through August 14th. One of Nebraska’s oldest repertory theatres, the Brownville Village Theatre is a true repertory theatre, rehearsing and performing shows simultaneously, and never performing the same show back-to-back. The theatre is in the charming arts and culture village of Brownville, Nebraska, a beautiful escape in rural southeast Nebraska. Make a quick weekend getaway to Brownville!

The Brownville Village Theatre takes pride in producing a variety of show in repertory. This summer, the season includes The Lightning Thief: The Percy Jackson Musical, book by Joe Tracz, music and lyrics by Rob Rokicki, a rock musical adaptation of the book by Rick Riordan; The Odd Couple by Neil Simon, the classic comedy about two mismatched roommates; Suite Surrender by Michael McKeever, a hilarious farce that chronicles two feuding divas when they are accidently booked to the same hotel room; Mama Won’t Fly by Jessie Jones, Nicholas Hope, and Jamie Wooten, a family comedy that follows three soon-to-be in laws on their impromptu cross-country roadtrip; and Angel Street (Gaslight) by Patrick Hamilton, a suspenseful Victorian thriller, the show that originated the term gaslighting.

The Lightning Thief: The Percy Jackson Musical is based on the 2005 novel by Rick Riordan and is a musical that follows Percy Jackson, a teenager who newly discovers he is a demigod. Percy, along with his new demigod friends, go on an epic quest to find Zeus’ missing lightning bolt and prevent a war between the Greek gods. A dynamic score and an imaginative fantasy story will have the whole family rooting for and rocking out with a whole slew of Greek gods and demigods. The musical kicks off the season on Friday night, June 10.

The classic Neil Simon comedy, The Odd Couple, premiered on Broadway in 1965 and would go on to be a successful 1968 film and 1970s television series. The story is about two mismatched roommates: the neat, uptight Felix Ungar and the slovenly, easy-going Oscar Madison. When Felix is thrown out by his wife, he must move in with his friend Oscar. Can two opposites find a way to live together? How funny will it be to watch them try? This show premiers Saturday, June 11.

Opening on June 24 will be the farce Suite Surrender. It’s 1942 and two of Hollywood’s biggest divas have descended upon the luxurious Palm Beach Royale with assistants, luggage, and legendary feud with one another in tow. Everything seems to be in order for their wartime performance…that is, until they somehow get assigned to the same suite. Mistaken identities, overblown egos, and double entendres round out this hilarious riot of a love note to the classic farces of the 30’s and 40’s.

Mama Won’t Fly, a family comedy, will begin on July 7. A hilarious race against the clock begins when Savannah Sprunt Fairchild Honeycutt agrees to get her feisty mother all the way from Alabama to California in time for her brother’s wedding. Savannah’s problem: Mama won’t fly. With only four days to make it to the ceremony, this determined daughter has no choice but to drive cross-country with her equally willful mother, Norleen Sprunt, in Mama’s vintage sedan. Another outrageous complication arises when the bubbly over-eager bride-to-be arrives announced. This ferociously funny, family-friendly comedy will have your laughing your way across the country and all the way down the aisle!

The final play of the season to open will be Angel Street, a thriller, and it will debut on July 8. As the curtain rises, all appears to be the essence of 19th century Victorian tranquility in the house on Angel Street. It is soon apparent, however, that Mr. Manningham, a suavely handsome man is slowly driving his gentle devoted wife, Bella, to the brink of insanity with the insinuating kindness that masks more sinister motives. A Broadway hit first produced on the West End under the title Gaslight and filmed twice, Patrick Hamilton has built and sustained some of the most brilliant suspenseful sequences in modern theatre as Bella, with the help of an unexpected caller, attempts to untangle herself from her husband’s web.

BVT brings in a small talented cast from all over the USA to perform, build, and create its productions. It is a uniquely fun experience to see a show at the Brownville Village Theatre surrounded by deep history and tradition.

The Brownville Village Theatre is one of the oldest repertory theatres in the state of Nebraska. Its success is due to it summer repertory season employing 12-15 young theatre artists from all over the nation. The theatre’s home is over a century old and was formerly the Brownville Christian Church. Annually, the theatre brings over 3,000 audience members locally and throughout the Midwest to Brownville.

The artistic directors for the theatre are Mitch Bean and Rachel Curtis, a husband-and-wife duo who are committed to tradition and growth of the Brownville Village Theatre. Both have been with BVT sometime having begun as members of the company since 2012.