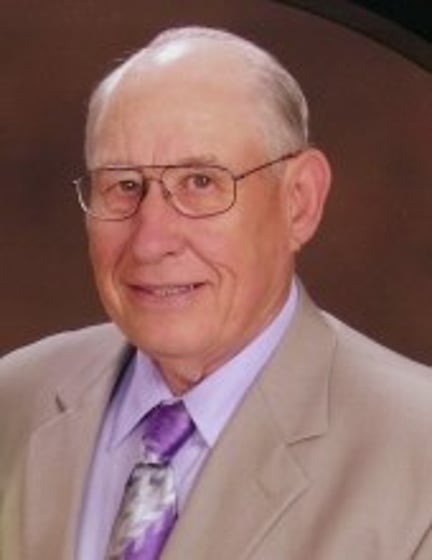 Wilbur Eugene Frederick, oldest son of Wilbur and Viola (Kreifel) Frederick was born on May 9, 1938 in a rock house that was located on an acreage east of Elk Creek, Nebraska. He attended various country schools in Johnson County and Pawnee County. He graduated from Table Rock High School in 1955.
On August 28, 1959, he was united in marriage to Audrey Balke. They were blessed with two children, Randall and Deanna.
Wilbur, also well known as Gene or Mick, joined the National Guard in June of 1956 and served for eight years.
In November of 1957, he attended Railroad Communication School in Kansas City, Missouri. Then in April of 1958 he was employed by the Chicago, Burlington and Quincy - Burlington Northern - Burlington Northern Santa Fe (CB&Q-BN-BNSF) Railroad as a train order operator station agent. He worked many positions for the railroad and worked in 36 towns, with the majority of his career in Nebraska, with last longer portion of his career in Table Rock and Lincoln, NE. After 42 years of service, he retired in May 2000. He was a 64 year member of the Railroad Transportation Union, a member of the Burlington Northern/ Santa Fe (BNSF) Veterans and the BNSF Cornhuskers Club.
In addition to his railroad career, Wilbur, along with his family, farmed on a small acreage between Elk Creek and Tecumseh Nebraska. In addition, he raised a variety of livestock at Table Rock, Nebraska. Wilbur enjoyed various activities and hobbies, especially fishing and woodworking. Wilbur passed away on May 4, 2022 in Lincoln, Nebraska.
He is survived by his wife, Audrey of Lincoln, son, Randall Frederick of Bennet, Nebraska and daughter Deanna (Dallas ) Reyher of Custer, South Dakota; grandchildren, Samantha (Andy) Wamsley of Humboldt, NE, Kaylie (Miles) Koso of Lincoln, Nebraska and Kendall Reyher (special friend, Ashley Jobe) of Custer, South Dakota; great-grandchildren, Charles, Talon and Scarlett Wamsley and Ellie Koso.
Wilbur was preceded in death by his parents, Wilbur Edward and Viola (Kreifel) Frederick and father and mother-in-law, Julius and C. Murel Balke.