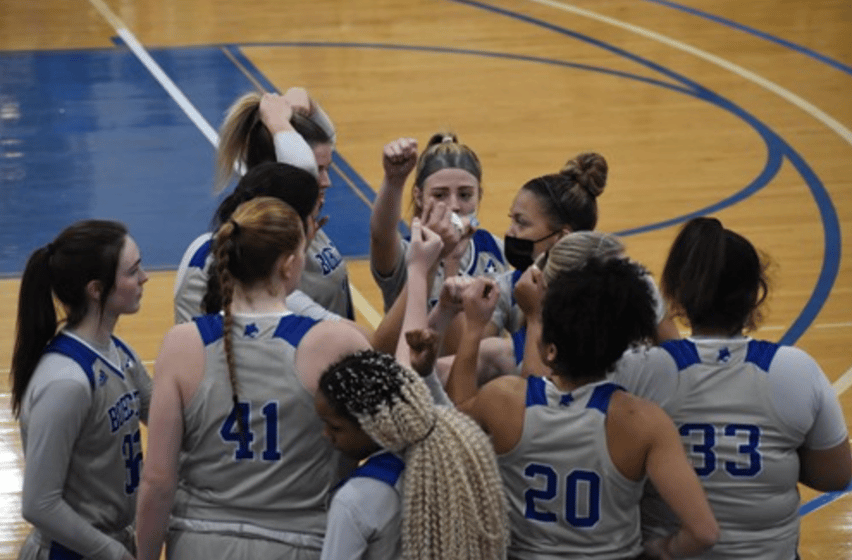 (Peru, Neb.)—On Saturday February 5, the Peru State women's basketball team picked up a close win over the Baker Wildcats. The Bobcats won 62-60 Saturday afternoon on Senior Day. Peru State improves to 10-13 overall and 5-9 in conference play, Baker falls to 7-16 and 3-11 in conference play.

The second quarter started with a layup from Hailey Ingram (Omaha), to give the Bobcats their first lead of the day 13-12. The Wildcats and Bobcats were in a back-and-forth affair for almost the entire second quarter That would be a theme throughout the entire game.

The Bobcats were able to tie the game at 16 apiece from a 3-pointer by Maddy Duncan (Hamburg, Iowa), the lead was short lived as Baker came right back down the floor with a three of their own. The Bobcats would regain the lead late in the second after making 3-of-4 free throws before ultimately being down one at the break from another Wildcat three-point bucket.

After the break, the Wildcats would pick up right where they left off hitting another three to open the second half. The Bobcats would then go on a 6-0 run of their own taking the lead 27-24 from a layup by Duncan.
Neither team in the third quarter could get much of a lead as the teams would trade buckets throughout. The Wildcats and Bobcats had an answer for each other every time down the floor.

The Bobcats stormed out of the gates in the fourth quarter going on a 5-0 run to take a 46-44 lead with 8:19 remaining. In the middle of the fourth quarter the Wildcats would regain the lead at 51-50 with a mini 5-0 spurt.
Duncan came up with a big with a three-pointer of her own for the Bobcats to take the 55-54 lead with only 3:08 to play. Both teams were not able to score in the final stretch until the last minute of action. Stewart hit a clutch free throw to put the Bobcats up two 56-54 with under a minute in the game.

After a 30 second timeout from Baker, they went down the floor and hit a three-point shot to regain the lead 57-56, 36 seconds remained on the clock. The ensuing possession Ingram drew a foul and knocked down two monumentous free throws, the Bobcats led 58-57 with 29 ticks left.

The Wildcats came down the floor and missed a three-point shot and Stewart hit two huge free throws with 20 seconds left. The Bobcats got one more stop with a big rebound from Jescenia Mosley (Shenandoah, Iowa). Peru State hung onto win the game 62-60.

Here is what head coach Ian Holleran had to say about tonight's gutsy win.

"I am super proud of our team today," said Holleran. "Baker is a tough opponent and that was a battle for 40 minutes." "We made some big plays down the stretch to pickup a major win for this program."

Holleran continued about the importance of winning on Senior Day.

"Senior Day is always very special, and it was awesome to get a win for "Duda." (Maria Alcantara the only senior in the program) "We will enjoy this one and look forward to Clarke Wednesday."

Four Bobcats ended the day in double-figures. The leading scorer for the Bobcats was Stewart as she had 15 points and nearly had a double-double with seven rebounds. Duncan, Ingram and Libby Baumert (Plattsmouth), followed with 13,12 and 11 respectively.

After an eight-game losing streak, the Bobcats have now won two in a row and look to build on that next week. Peru State will be on the road to face the Clarke Pride this Wednesday, February 9.