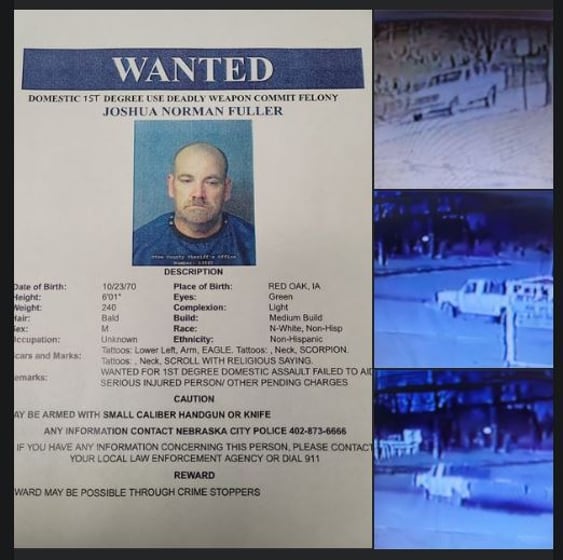 NEBRASKA CITY-Joshua Fuller, 50, who is initially charged with a domestic assault that included serious injuries to a Nebraska City woman who was run over by a pickup truck has now received several more charges.

Fuller's girlfriend Shannon Robinson age 44,  was transported to Nebraska City Fire and Rescue to CHI Health St. Mary’s and she was later taken by medical helicopter to Bergan Mercy Hospital in Omaha, where Robinson was declared dead last evening.

Fuller has now been charged with Manslaughter, Motor Vehicle Homicide, and Use Of A Weapon To Commit A Felony.

Police say they were called to a trailer park on a disturbance complaint. When they arrived witnesses told them that Fuller had been arguing with his girlfriend, who is mother of Fuller’s twin children. As he pulled away in a white 1995 Ford F-150 pickup the woman approached and ended up beneath the vehicle. Witnesses say she was run over by the driver's side, rear wheel.

An arrest affidavit says witnesses told police that Fuller looked into the rear view mirror of the truck, before leaving acceleration marks on the pavement as he left the parking lot.

Fuller was previously charged with domestic assault on April 24. He was released from custody Nov. 23 after posting a $1,000 bond provision. As a condition of bond, he was to have no contact with Robinson.