On Saturday, September 10, the Peru State football team was defeated by Benedictine 31-7. The Bobcats are now 1-2 overall on the season and 0-0 in Heart of America Athletic Conference play
Monday, September 12th 2022, 8:33 AM CDT
By Peru State Athletics 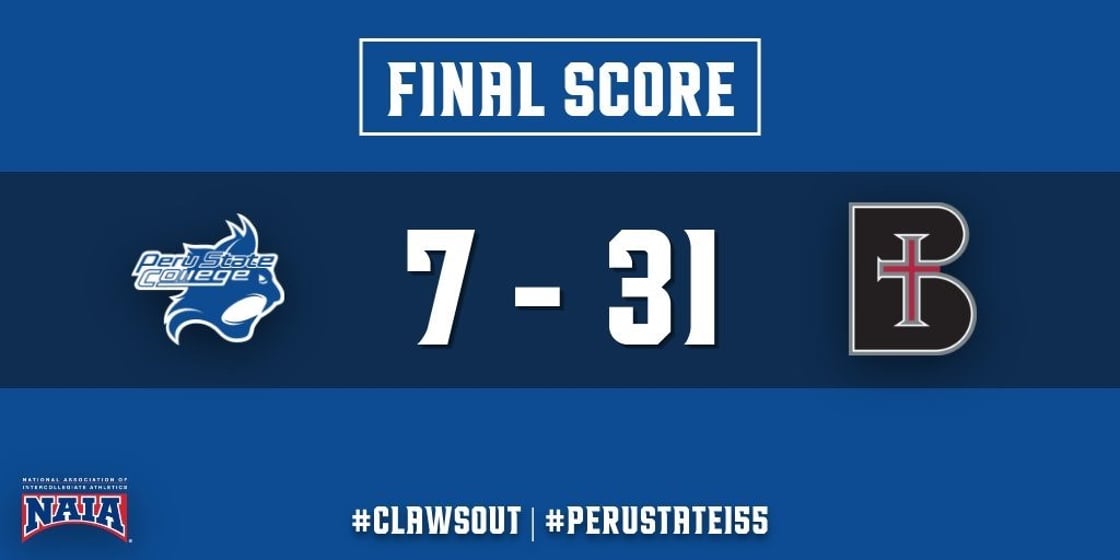 (Peru, Neb.)—On Saturday, September 10, the Peru State football team was defeated by Benedictine 31-7. The Bobcats are now 1-2 overall on the season and 0-0 in Heart of America Athletic Conference play, while the Ravens are now 2-1 overall and 0-0 as well in the Heart.

Below is a breakdown of how the game went…

On the first drive of the game the Ravens were marching down the field but they stalled out at the Peru State 33-yard line as a holding penalty and an incomplete pass thwarted the drive.

The Bobcats first offensive possession started with a big play as quarterback Will Mueller (Springdale, Ark.) hit Jarrius Anderson (Cordova, Tenn.) for an 18-yard strike. Peru State would not be able to get anything more going offensively as a sack forced a punt.

After a wobbly punt, the Ravens started in great field position and a 26-yard pass had them down to the one-yard line. The running back for the Ravens then punched it for a score as they led 7-0.

Peru State had another promising start to the drive as a 13-yard pass from Mueller to Stacy Livingston (St. Louis, Mo.) put the 'Cats right around the 50-yard line. Unfortunately, another sack would lead to another Peru punt.

The Ravens were able to get into Bobcat territory but the 'Cats bowed up defensively and forced a punt. The 'Cats would have a quick three-and-out on offense. Early in the second quarter the Ravens offense was humming as they capped off a seven play 78-yard touchdown drive with a 28-yard passing touchdown to make the score 14-0.

The Bobcats and Ravens then would both have two quick three-and-outs. The Bobcat offense finally found paydirt in the middle of the second, as a 28-yard touchdown pass from Mueller to Tyreese Schieffer (Omaha) had the 'Cats within a touchdown.

The Bobcats had the Ravens on their heels as they were faced with a third and long but they converted a 58-yard pass which eventually led to a 16-yard rushing touchdown for the Ravens.

The Ravens led the Bobcats 21-7 at the half. Benedictine came out and recovered an onside kick to start the second half as the rain started to pour down in Atchison, Kansas. The Ravens then hit a huge pass play to get into the redzone. The Bobcat defense bent but they did not break as Clayton Thrasher (Mandeville, La.) blocked a field goal attempt from the Ravens.

The Bobcat offense had a decision to make on fourth and short and Jayden Neal (Belleville, Ill.) hit the hole for a 33-yard gain. Unfortunately, a no gain run and three straight incompletions with the raining spitting down stalled out the 'Cats drive.

After the Ravens were lucky to recover a fumble, they marched down the field and hit an eight-yard touchdown pass to extend their lead 28-7 late in third quarter. The Bobcat offense could not get much going on their next drive and were forced to punt.

Early in the fourth quarter the Peru State defense forced a quick three-and-out. A great Raven punt set up the 'Cats in poor field position as they would also go three-and-out.

The Bobcat defense then had the Ravens going backwards as Thrasher and Marcel Wood (Augusta, Ga.) sacked the Ravens quarterback setting up a long third down. Benedictine would get 12 yards on third to setup a manageable fourth down. The Ravens drew the 'Cats offsides so they kept the drive alive with an automatic first down.

Benedictine on a third down would get a 15-yard rush to setup the Ravens in the red zone. Benedictine would only get three points out of the drive but were now leading by 28, 31-7.

Peru State's offense would continue to struggle in the fourth as they could not find plus territory and Benedictine came away with a 31-7 victory.

Mueller was 11-of-18 passing for 109 yards and a touchdown on the day. Leading the way in rushing was Neal with 14 carries for 71 yards. Anderson led the way in receiving yards with two receptions for 29 yards. Schieffer had the lone touchdown.

Thrasher had 13 total tackles on the day, three of which were solo, with a half tackle for loss and a half sack.