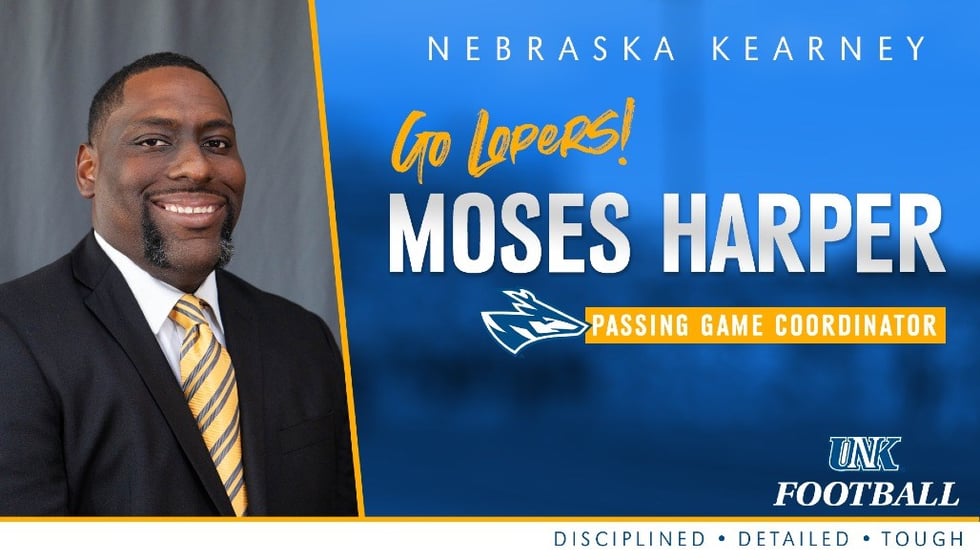 Harper is the sixth full-time assistant Held has hired since becoming head coach in late December. Eric Lee Jr. will be UNK's defensive graduate assistant (secondary); an offensive grad assistant will be named tomorrow and round out the staff.

Harper most recently was the tight ends coach and Director of Football Operations at Missouri Western (2022). He also has coached at Division II member William Jewel (Mo.) College and at two junior colleges in Fort Scott (Kan.) C.C. and Coahoma (Miss.) C.C.

"Coach Harper is a great hire for our football program. He has Coordinator experience as well as a familiarity with the MIAA," said Held.

A Mississippi native, Harper helped develop second-team All-MIAA pick Cam Grandy this past season. The fifth-year junior set new career-highs in catches (31) and receiving yards (275) with the Griffon tight ends posting a team-best 3.4 grade point average. Finally, Mo West was among the MIAA and national leaders in both total yards and rushing yards.

"I've known Coach Harper for many years and I've always respected him from afar. He fits what I want in a coach here," said Held. "He's a great teacher, recruiter, coach and family man."

A former college basketball and football player, Harper spent three seasons at WJC in suburban Kansas City. The Cardinals are a member of the Great Lakes Valley Conference (GLVC) and he served as Offensive Line Coach, Camp Coordinator and Academic Achievement Coach. He coached at least two All-GLVC o-linemen each season and recruited a second-team all-league receiver who was tabbed by his peers as team MVP. The Cards o-line also developed and increased numbers in total yards and touchdowns.

Harper spent a total of six seasons at Fort Scott (2011-15) and three years at Coahoma (2016-19). For the Scotties, he began as receivers coach, recruiting and passing game coordinator before being promoted to Assistant Head Coach and Offensive Coordinator. He coached multiple players that moved onto the Division I ranks and into the NFL including Jared Dangerfield (New Orleans) and Alexis Johnson Jr. (Tennessee). The Fort Scott offense also ranked number in the league and was among the leaders in the NJCAA in both yards and points.

In Clarksdale, Miss., for the CCC Tigers, Harper was the Associate Head Coach and OC. He coached eventual NFL players Chris Claybrooks (Jacksonville) and Josh Johnson (Seattle) with the offense moving up 20 spots on the national charts. The Tigers had its first-ever 1,000-yard rusher during this time and saw its total yards per increase by 250.

As a player, Harper was a wide receiver for the professional Wichita Wild. He starred in both basketball and football and NAIA Central Methodist (Mo.) University after being a basketball player at North Central Missouri College. Harper was all-conference for the CMU Eagles football team who helped the basketball team win 28 games and reach the NAIA Division I Sweet 16. At NCMC, he was part of the first 20-win season in school history.

Harper earned an Associates of Arts degree from NCMC and a Bachelor of Science degree in Recreational Management from CMU. He is married to the former Roschana Ross and they have two children, Kaden and Elise.

The new Loper staff is out recruiting in preparation for Division II signing day on Wednesday, Feb. 1